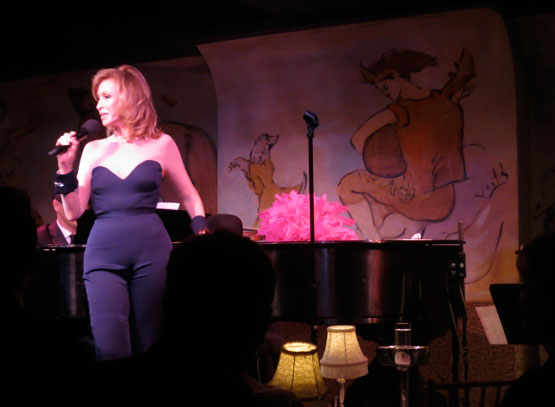 “Yanna performs in the European tradition of the chanteuse. Neither Marlene Dietrich (although along those lines) nor Piaf, Yanna nevertheless brings their sentiments and emotional intimacy, with her style, to her songs. Her show is for You.

I’ve seen her perform several times. Her repertoire mingles American Songbook with European songs, some of which we know and all of which we get the gist of even if we don’t understand a word. (Sometimes it’s better if you have a good imagination.) Her theme — which is recurring —  is unabashedly sentimental to the American ear, yet sophisticated and effecting. And kind.

This new show which she calls “In Love With Love,” runs for about an hour, and is her best yet. She takes us easily from Vernon Duke’s classic “Taking a Chance on Love” (introduced by Ethel Waters) into Bizet’s “Carmen” and on to Richard Adler and Jerry Ross’ “Whatever Lola Wants (Lola gets)…” backed a great group of musicians and musical director David Shenton at the piano. It features Cole Porter, Larry Hart, Georges Bizet, Adler and Ross, Vernon Duke, Charles Aznavour, Michel LeGrand, Mintinguett and more.