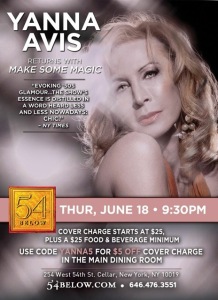 “Ah Paree! Evoking ’50s glamour through teasing taunts, statuesque French chanteuse Yanna Avis sings with a wry understanding… The show’s essence is distilled in a word heard less and less nowadays: chic.” – Stephen Holden, The New York Times. With her new show “Make Some Magic” Yanna Avis takes us on a romantic journey through the landscape of love in her own continental cabaret style. She says: “No matter where it is, no matter what the language is, the feeling is always the same! I believe in the power of a love-song, even when it is only a dream or…an illusion!” “This cosmopolitan femme fatale sings sultry torch songs with equal ease in French, German, Spanish and, of course English… Nobody else is carrying on the European tradition quite so well. Ms. Avis has a raw, unrefined talent, and an admirable resolve to make time stand still.” – Rex Reed, New York Observer.